Buddha Jayanti is a commemoration of the birth of the Gautam Buddha who founded Buddhism. The festival is celebrated by all Hindus and Buddhist communities around the world.  Mostly, the countries like Nepal, India, Thailand, Bangladesh, Bhutan, China, Korea, Laos, Vietnam, Mongolia, Cambodia, Singapore, Indonesia, and Sri Lanka celebrate Budhha Purnima.

As per the Buddhist calendar, it is the most sacred day. On every full moon of the Baisakh month, Buddhism followers celebrate Buddha Jayanti. The day marks the birthday of Lord Buddha and the day of his enlightenment to achieve Nirvana after continuous meditation for 49 days.

Hinduism regards Buddha as the ninth reincarnation of Lord Vishnu. Therefore, Hindus also follow and celebrate the festival with great enthusiasm and interest. 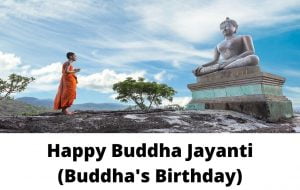 A monk praying in front of a buddha statue

Buddha Jayanti is approximated on the Asian lunisolar calendar, therefore the exact date differs every year. So, followers believe Buddha Jayanti or Buddha Purnima to be a thrice-blessed day.

Significance of Gautam Buddha on life

The day of Vesak is when Buddha denied God and never claimed to be God. Buddha didn’t want any statues of him and people to pray to him as God. Yet, his birth, enlightenment, and Mahaparinirvana (Death) along with his Eight-fold path made him the “Light of Asia”.

Buddha always believed that the primary cause of human problems and dissatisfactions is the human mind itself. Hence, the teachings of buddha are more for controlling your mind.

The celebration of human energy form and how rearranging its geometry and mental consciousness transformed Siddhartha Gautam into a divine Karma entity, Gautam Buddha. “Buddha” refers to the person who attained full enlightenment, on liberation from the cycle of birth and death, the real awakening. The Buddha Jayanti festival teaches us to follow the Buddhist teachings of Ahimsa and Non–Violence. 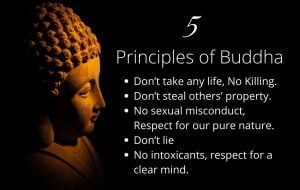 Nepalese celebrates Buddha Jayanti with great enthusiasm. On this very auspicious day, people offer prayers, observe fast, chant, meditate and discuss sermons and the teachings of Buddha. Besides, people take a dip in the sacred Ganges on Buddha Jayanti with the belief that it washes away sins.

The Bodhi tree (Ficus religiosa or sacred fig) and Mahabodhi temple are beautifully enhanced with a lot of flowers, colored flags, and lamps.

Buddhism vows five principles known as ‘Panchsheel’. So, they strictly follow rules. During the festival, they make birds free from the cages. Likewise, they avoid eating meat strictly. Instead, they eat rice pudding. They drizzle the scented water and milk along with the roots of the Bodhi tree. Buddhism is all about peace, wisdom, compassion, and kindness so they offer food, clean drinking water, and clothes to the sick and the poor. 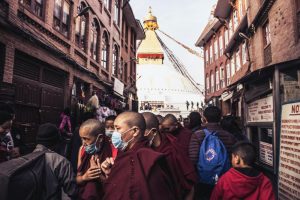 In Lumbini, the birthplace of Gautam Buddha, Buddha Jayanti incorporates several functions and processions. In a function, the devotees place the statue of Buddha on a chariot and take it out for a procession. After the prayers, they carry out a prize distribution ceremony on the occasion of the Buddha Jayanti festival. There’s a national holiday in Nepal, so monks, ambassadors, and ministers attend the remembrance program.