Gadhimai Temple And The Festival Of Blood

The Gadhimai Temple is a holy shrine for Hindus which hosts the Gadhimai festival in Nepal, also known as the Festival of Blood. “Gadhi” means “place” and “Mai” means “mother” in the Bhojpuri language.

Because of the mass animal immolation that happens during the feast, the holy place has also made headlines in different international media as the place of biggest animal sacrifice. 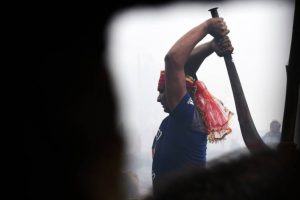 The main temple of Gadhimai is in the Bariyarpur village of Mahagadhimai Municipality in the Bara District of south-central Nepal. The location is well known as the motherland of the Bhojpuri people who are devoted to Gadhimai. And people from other regions mainly visit here to worship the Gadhimai Devi, who is favored as the goddess of power and strength.

There’s a belief that Goddess Gadhimai fulfills all the wishes of people to sacrifice an animal in the temple. Thus, a huge Gadhimai festival takes place in the area every 5 years, sacrificing thousands of domestic animals. There’s a special ritual known as the Panchabali, which means the sacrifice of five animals, including buffalo, pig, goat, chicken, and forest rat.

The pagoda-style temple of Gadhimai is 160 kilometers away from the Kathmandu Valley, along the Indian border. Therefore, the temple has equal importance to both Indian (especially Bihar residents) and Nepalese people living in or near that area.

The Origin and History of Gadhimai Temple

There is a fascinating history behind the origin of Gadhimai. According to the native people, many years ago, a thief visited the house of Bhagwan Chaudhary, a landlord in the village. The villagers caught the thief red-handed and beat him until his death. Everyone feared the punishments. But Mr. Bhagwan took the blame upon himself and saved the villagers. Later, the police came and caught him. Then the police brought him to a prison at Makawanpur fort.

Mr. Chaudhary was a religious person. While he was in prison, he would always meditate and worship the goddess Kali. One night, the goddess Kali appeared in his dream and asked him to build a temple for her. When he was awake, he found himself free and out of prison.

Then he got up, thanked the goddess, and made his way towards his home with a promise to build a temple for her. Before leaving, he picked up some soil under her feet and use it in the temple, from where the goddess disappeared. Then he tied the soil in his turban and started the journey to his village of Bariyarpur.

As it was a long way from Makawanpur fort to Bariyarpur, he stopped at many places to take a rest. While he sat down to rest, a fraction of the soil that he carried would fall to the ground. Later, the places where the holy soil fell became places of worship for the goddess Gadhimai. Some of these places include Makawanpur Gadhi in Makawanpur, Jeetpur Gadhi in Jeetpur, etc. These days, people who cannot visit the main temple of Gadhimai visit these places to sacrifice animals to fulfill their wishes in life.

As soon as Mr. Bhagwan Chaudhary reached his place, he searched for a pure and holy place and built a temple for Goddess Gadhimai in his village. On his release from confinement, he wanted to offer something to the goddess. So, he sought advice from a villager, who was a descendant of Dukha Kachadiya. The descendant shed blood for the goddess from five different parts of his body. The blood made light appear in the soil. This is how the ritual of Gadhimai started.

Later, he started offering the animals to the goddess in return for his freedom. Every five years, he used to offer five living beings, i.e., a forest rat, a local cock, a pig, bucks (a male goat), and male buffalo (bulls), as a sacrifice. And, this tradition continued and took the name of the Gadhimai festival, which is a huge celebration in the village now.

The Gadhimai Festival is the celebration of animal sacrifices.

The Gadhimai festival is a Hindu festival celebrated every 5 years in the month of Mangsir (i.e., between November and December). The celebration lasts for the entire month of Mangsir. In previous years, the festival has been embroiled in several controversies. However, few people still celebrate it.

First, the chief priests of the temple of Gadhimai perform pujas on the day of Kal Ratri. Before starting the ritual, the priest puts an oil lamp in front of the statue of the goddess of Gadhimai. As the rituals continue, the oil lamp in front of the goddess lights up itself. Priests consider this gesture the start of the main part of the festival, which is animal sacrifices. The priest (Pandit) then offers the lives of five animals to the Goddess (Devi), which is called Panchabali.

After the priest, many people offer animals to the goddess. This special ritual lasts for two days. Several thousand people come from all around the world (especially from India and Nepal) to visit the area to attend the festival. During the 2 days, men sacrifice several thousand animals to offer their blood to the Goddess of Gadhimai. There will be over 200 men appointed just to slaughter the animals with a Nepalese knife called a Khukuri. The hundreds of men slaughter thousands of animals in two days. People believe that offering animals will fulfill their wishes. In the past, the festival was named the world’s largest animal slaughter. But, things have changed now and animals slaughter has plummeted over the years.

According to BBC reports, millions of devotees have traveled to the temple to either sacrifice animals or witness their slaughter to have their wishes fulfilled by the goddess.

There’s a large territory (3-5 km in radius) surrounded by an enormous wall where people sacrifice animals. There’s a separate hole dug around the corner to keep the heads of the animals offered as an oblation. The animal sacrifice also takes place outside the wall, near the small lake. People who don’t sacrifice animals offer sweets, coconuts, cosmetic items such as red-colored cloth, ornaments, comb, bangles, Tika, Sindoor, etc. Some men even offer their hair to the goddess while some set birds (Pigeon) free in the temple environment.

If someone couldn’t sacrifice animals in the 2 days, does it in the Maghe Sankranti festival within one year of the original Gadhimai festival. There is a strong, superstitious, and conservative belief that the goddess grants a devotee’s wish after they offer animals.

As the Gadhimai festival lasts for a month, on the other day’s people organize fairs, put on stalls for food, and small shops for local businesses. Devotees play and sing religious music. A huge number of people gather there to watch the fair, play different games, watch people perform and mainly bow in front of the Goddess Gadhimai.

Other small temples around the main shrine of Gadhimai

There are many other small shrines near the main temple of Gadhimai. Just beside the Gadhimai are the big Hanuman temple and small statues of Hindu gods and goddesses (like Laxmi, Ganesh, etc.).

Besides, there is also a temple that has only Trishul (Prong). You won’t find any statues of God near Trishul.

Near the Trishul is a big peepal tree named Brahmasthan. Believers worship that tree and tie a red and yellow thread around it. People also offer coconut, sweets, and fruits to the tree.

Just a kilometer away is the Katmasi Mai, the other popular Hindu temple in the area. A different festival takes place in the Katmasi Mai every 5 years, the year before the Gadhimai Festival. In Katmasi Mai too, people offer animals to the Goddess there, in the name of spirituality, tradition, and culture. Offering animals there also takes place for two days. Most of the sacrifices are made in Ashtami and Navami, according to the lunar calendar.

Why is Gadhimai a controversial festival in Nepal?

The Gadhimai festival is one of the most controversial festivals in Nepal. People kill hundreds of thousands of animals in the Gadhimai festival that comes every five years in the name of devotees, spirituality, culture, and tradition. In 2009, celebrities Brigitte Bardot and Manita Gandhi made several efforts and attempts to stop the killing of innocent animals in the name of tradition. Many other animal rights groups have conducted protests and events against this festival.

Even now, the Gadhimai festival is celebrated with joy and huge celebrations. Although the killing of animals still occurs, the number of animals has reduced compared to previous times. 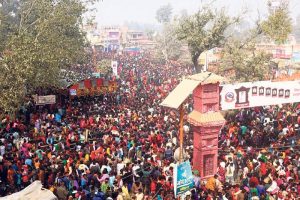 Gadhimai Festival takes place in Bariyarpur village in the Terai region of Nepal. It is also known as the Khumba Mela. Every year thousands of visitors attend the fair. The major attraction of the fair is the animal sacrifice and the main temple of Gadhimai. Also, people who visit the fair don’t miss the Bibahapanchami, a religious festival in Janakpur which is just a few hours of drive from the area.

As it is in Terai, road transportation to the temple is easily available. The village is 28 km away from Birgunj. Thus, an hour’s drive from Birgunj through the Birgunj Kalaiya road takes you to the temple area. Night buses also run from Kathmandu to Bariyarpur. So, the devotees can use any means of transport according to their best interests.

If you are visiting the temple, you will find good hotels and lodges in Birgunj, Kalaiya, and Parsa only. For food, you can find small local restaurants around the main Gadhimai Temple. You can only find local food there. If you want to have western or continental food, then you have to move to Kalaiya and Birgunj. You’ll easily find a hospital and banks near the temple. You’ll also find electricity, internet, and wi-fi facilities in the temple area. Shopkeepers expect cash and don’t use cards for payment. So, if you are visiting the Gadhimai Temple, carry enough cash with you.

Mostly, the temperature in the region is always hot. But the Gadhimai festival occurs in winter. So, during that time, you may feel cold.

For drinking water, there is a large water tank near the temple. You can refill your water bottles there or buy a mineral water bottle in the local shop nearby. The land near the temple is very fertile, so vegetables cover an enormous area of the field. Watch people gather and work in vegetable fields, singing folk songs.