“I remember I was lost in Nepal because a hiking trail disappeared and I ended up walking through people’s yards in a tiny village. A woman came out, and I thought she would yell at me for being on her property, but she invited me in for tea! That would never happen where I grew up.”     – Michelle, a travel writer

Welcome to the first interview from Heaven Himalaya travel interview series of our favorite travel bloggers around the world. Meet Michelle, a travel writer. She writes for a travel blog, Full Time Explorer. Originally from New York, her adventurous nature brought her to the beautiful nation and tied a knot with Nepal. Through the interview, you will know more about Michelle, her journey from New York, the USA to Kathmandu, Nepal, and the differences between living in New York and living in Nepal. Further, she will share her ride to starting a travel blog.

What was the first trip you remember taking in Nepal, and how old were you?

My first trip to Nepal was a few years ago. I think I was 28. I’d planned a backpacking trip to Southeast and South Asia that went to 10 countries in 9 months. I wasn’t very familiar with Nepal but the book Little Princess by Conor Grennan crossed my path and after reading it I knew I had to go to Nepal. The flights in and out of Kathmandu are expensive compared to Southeast Asia, and I was on a major budget, but I booked it, anyway. I’d read that the people of Nepal were the friendliest in the world, and I was drawn to this country. It seems funny now because, in any other country that had expensive flights, I just crossed off my list.

What made you stay in Nepal?

After visiting, I fell completely in love with this country. I met a few locals who showed me areas that were off the beaten path. I really loved seeing village life and enjoying its simplicity. In New York City, everything is done at the fastest speed. You walk to work fast; you eat fast; you run from one place to another. It was so nice to slow down in Nepal. If something went wrong, people just shrugged and said “Ke Garne?” (What to do?) and then went on with their days. In New York City, if something went wrong, I would go into problem-solving mode and fix the issue in a matter of minutes. It was nice to see that the word doesn’t end if you take a breath and wait for things to sort themselves out.

I was in Nepal for two months on my first visit. I wanted to stay longer, but I had plans to meet my friends in Vietnam. After Vietnam, I returned home for a few months to spend time with my family. When it was time to travel again, I didn’t want to go anywhere except Nepal. I ended up spending 5 months in Nepal and did the Mera Peak Trek and the Annapurna Circuit Trek. I also made some local friends, and I ended up meeting my husband. I returned the following year for 5 months and during that trip; I got engaged. The next year, we got married! 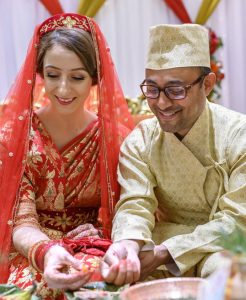 Michelle, getting married in Nepali tradition.

Have you been anywhere inside Nepal which turned out to differ from how you imagined? If so, how?

These days I feel pretty familiar with Nepali culture, so I’m not very surprised when we travel. I think I’ve adapted to the mindset to expect anything in Nepal. But, when I first got here, I didn’t really know what to expect. I did little research on Nepal. I’d already been to several countries in Asia by myself and I was confident traveling alone. I just sort of showed up. I had an itinerary planned, but that was it. I think everything surprised me on that first visit. I didn’t know how beautiful the mountains would be or how nice the people were. I remember I was lost because a hiking trail disappeared and I ended up walking through people’s yards in a tiny village. A woman came out, and I thought she would yell at me for being on her property, but she invited me in for tea! That would never happen where I grew up.

I was also surprised by how people lived. In the villages, people have really basic accommodation and they have to work really hard to survive, but they also have this spirit about them. In NYC we make good money and our jobs don’t involve a lot of physical labor, but people are burnt out and usually aren’t that happy. It was so interesting to see people who felt genuine joy even though they owned little. That really changed the way I see things. Family, friends, and good health are so much more important than a big house and lots of stuff. 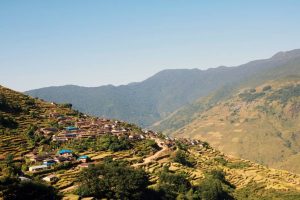 A beautiful village in Nepal

When did you start Full Time Explorer and why?

This is a funny story. My life in New York City was coming to a weird stop. The company I worked for as a fashion stylist filed for bankruptcy, and they owed me a lot of money that I would never get paid. My boyfriend and I were going through a breakup. I was using the money from styling to fund my bridal fashion line, and without that income, I had to close my business.

One of my best friends was going through a similar situation and we kept joking we would take off and travel for a year since nothing was holding us back. She works in social media and figured if we started a blog, we could stay places for free for mentioning them on the website. Full disclosure, I’ve been blogging for 5 years and have never been offered anything for free for writing about it haha. But that’s how it started. My friend ended up getting a new job. She met her husband and got a new apartment before we took off for Asia, and I went ahead with the plan, anyway. I ended up loving blogging and writing about travel in Full-Time Explorer, so it was a happy accident.

What has been your most rewarding travel moment?

One of my friends raises money to deliver chlorine makers to parts of the country that are plagued with water-born illnesses. I had the honor of going on a trip with him to the Jarjakot District to deliver the chlorine makers to schools in the area. I had no expectations when we got there. We had been off-roading and camping for days, but we showed up at this village and a procession of drums greeted us. The drummers led us to the village where hundreds of people were waiting and forming a line on each side of the minor road.

As we walked up, they put handmade Mala’s (flower garlands) around our neck. I mean, hundreds of people were putting flowers around our necks. There were so many Mala that they were up to my ears. There was this feeling in the air that’s really hard to put into words. A sort of unspoken gratefulness and joy that their children wouldn’t have to suffer these preventable diseases anymore. It brought tears to my eyes. I was so overwhelmed by that welcome. It is by far my best memory from my travels. Nothing will ever compare to that. 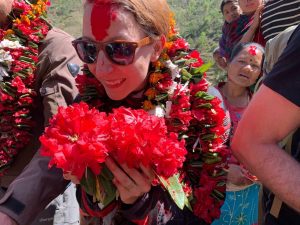 Michelle being welcomed by flower garlands

How easy is speaking Nepali?

For me, it’s super hard! In English, we don’t conjugate verbs as much. In Nepali, there are so many conjugations, and I’m always mixing them up. I really like speaking Nepali in small villages because people are so patient. It sometimes takes me a few minutes to say one sentence, and people speak really slow so that I can understand. In Kathmandu, people speak so fast, but I’m getting better at it slowly. Maybe in five years, I’ll be fluent. That’s the dream, anyway. Here are travel tips for Nepal. Learn a few common Nepali words before visiting here.

Do you miss a handsome salary in the fashion industry in New York?

Not at all! With that big salary came some big bills haha. I think people know NYC that’s very glamourous, but it’s super expensive to live there and it’s really hard to save money. The rent is insanely high. Even buying groceries to cook at home is expensive. I don’t regret my time in New York City. I really loved going to school and living there after graduation, but it’s hard to stay there long-term. I met so many people who told me I’d want to leave after 10 years and I thought they were crazy but after 8 years I was burnt out and exhausted. I wasn’t thrilled and I was too caught up in material things.

I don’t make nearly as much these days, but I’m so much happier. I don’t need a lot of stuff. Now, I get to travel for a living. I get to spend time with friends and family. My health has improved a lot. I was always sick in NYC because I was overworking myself and my immune system crashed. I’m a much happier, healthier person these days and honestly, no amount of money would make me go back.

Do you plan to return to New York anytime in the future?

I try to return every year to visit friends and family, but it’s just to visit. I have no plans to stay there long term. Nepal is my home now. I go back to South Carolina to spend a few months with my mom and sister each year, and that is something I really look forward to. I can’t wait to see them for Christmas and the holidays!

What’s the best travel tip you always give people?

Go with the flow! On my first trip, I over-planned and when opportunities came up, I wouldn’t be able to say yes because I had already booked something. Plan enough to get a rough idea of what you want to do, but leave space to make changes. My husband and I always leave a few buffer days because if we fall in love with a place we can stay there longer. Likewise, if we don’t like a place, we just move on and go somewhere else. In Nepal, so much information is missing online. I hope to fill that gap, but there are so many places that are off the radar, so it’s good to listen to locals and have the flexibility to go somewhere you haven’t heard of.

Do you have a bucket list? If so, what is on it?

I had a pretty crazy bucket list on my first trip. It contained a lot of random things like bungy jumping, summiting a mountain, scuba diving, etc. I crossed a lot of those things off, but somewhere along the way, I realized my bucket list was putting too much pressure on me. Once I say I’ll do something, I have to do it. So, I threw out my bucket list and the idea that I needed to complete certain things for my trip to be a success. That being said, there are some dream trips I’d like to take in the future. The Great Himalayan Trail is one of them. I love the idea of walking across Nepal before it’s so modernized that you can drive the entire way. I want to be an old lady saying, “In my day, the only way to cross the country was on foot!” 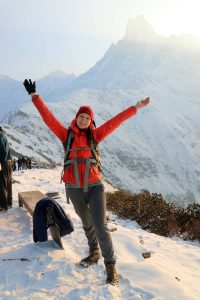 Thank you so much Michelle for being the first blogger in this Heaven Himalaya interview series. It was such a pleasure to know more about you. The differences you made between living in New York and living in Nepal were all outstanding. We hope you make it to the Great Himalayan Trail soon.