Nepal is a divine place nestled by the conglomeration of mystical mountains blended with unique civilization settlements. The country has many amazing places to visit. Out of them, 11 places in Nepal have been listed as the UNESCO World Heritage Site.

The land of Nepal is not just an arresting blend of pragmatism along with reminders of culture and natural charms, but it also carries on the mystics of the ancient history of science and civilizations like The Legend of Yeti, The Abominable Snowman. We can see these ancient mystics and history on the cultural heritage sites in Nepal.

Let us look at the list of UNESCO World Heritage Sites in Nepal. 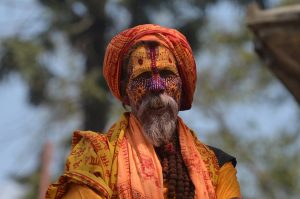 Existed since 400 AD, the Pashupatinath temple is circumambient with other smaller temples, sculptures, tantric living homes, ashrams (a hermitage for religious retreats). Pashupatinath means “lord of the animals” which is also the national deity of Nepal. This shrine is not just a masterpiece in architecture but also an immense attraction to all Hindus all over the world. UNESCO enlisted the Pashupatinath temple and its surrounding as the World Heritage Site in 1979 AD.

The place has many other attractions. The holy Bagmati River flows alongside the shrine. There’s a crematory on the backside of the holy place. The place of worship has silver sheets on the doors and golden sheets on the roof. Its main eccentric attraction is a unique Shiva Linga that displays eight faces of Lord Shiva. This miracle place was also unharmed, during the 7.8 magnitudes that hit Nepal in April 2015. If you are planning a visit to Nepal or in a Kathmandu Tour for a day, you shouldn’t miss this holy shrine of Pashupatinath to be included in your itinerary. 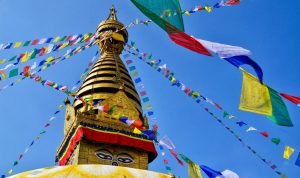 Witnessing the heart-gratifying blend of Hinduism and Buddhism of religious tolerance, the Swayambhunath site is an ancient religious complex. The Tibetan name of the stupa gives the meaning of “Sublime Trees”. The tourist destination is famous for five Dhyani Buddhas that represent distinct enlightened consciousness. Similarly, some people also know the Buddhist stupa with the name of “Monkey temple”. UNESCO included the monument, including other sculptures, as a World Heritage site in the year 1979 AD.

The place has unique features and is one of the biggest shrines for Buddhists all over the world. The enormous Swayambhunath stupa has two eyes and a curly nose in between. Eyes in the stupa represent wisdom eyes, and the question-mark-looking nose represents unity. You need to climb 365 steps to reach the main stupa at the top. While you climb, you visualize a huge brass-plated lightning bolt adorned with animals as per the Tibetan calendar. Finally, the hilltop provides a gorgeous view of the Kathmandu valley and the nearby hills.

The stupa is in the center of Kathmandu. Anyone can reach there by a 30 minutes bus ride from the Tribhuvan International Airport. 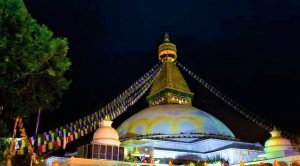 Discover the temple within you in the Boudhanath Stupa, symbolizing serenity for the people. This skyline-dominating stupa got eyes on all its sides, personifying awareness with the images of the meditational Buddha inset behind copper prayer wheels. Boudhanath Stupa is the largest stupa in Nepal. The holy place was built after Mughal invasions during the 14th century. The copper prayer wheels engraved with the handwriting mantra are an aid to accumulating wisdom and meditation.

Boudhanath Stupa has enlisted as a World Heritage Sites in Nepal by UNESCO in the year 1979 AD. Since then, the popularity of the place among international travelers has significantly increased. You can enjoy the buzzing spirituality from morning to night in an outstanding mandala-designed stupa. Also, it is a divine place for Buddhists and Hindus all over the world. So, there’s a vast crowd during Buddhist festivals such as Buddha. 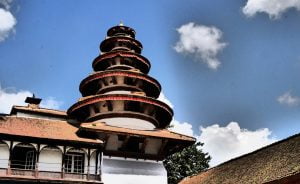 Durbar Squares are plazas’ paradigm for the Nepalese-built heritage. The Malla Kings, who built Kathmandu Durbar Square in the twelfth and eighteenth centuries, were former rulers of Kathmandu during that time. These royal squares lie opposite the old royal palace of the former Kathmandu Kingdom. The royal palace is rich in Nepal’s history. It is also the central cultural hub of synergies related to tantrism, Buddhism, and Hinduism. The Hanuman Dhoka, European-style architecture, courtyards, sculptures, stupas, temples, etc. displays the ancient royal taste.

Kathmandu Durbar square is supreme for being the site for holy ceremonies, cultural rituals, religious significance, coronations, and other royal events.

In 1979 AD, UNESCO enlisted Hanumandhoka Durbar Square in the World Heritage Sites. The royal mansion is in the center of the capital city and anyone can reach there by a 20 minutes bus ride from Tribhuvan International Airport.

Patan Durbar Square is a place full of shrines with graceful carvings, ancient royal palaces, and temples. The square celebrates Malla’s marvelous reminiscence of unique Newari culture and architecture in 55 major temples, artisans, and Buddhist monasteries, and a spectacular street carnival called Jatra. We can see the flourished art in the artisans of people in Thangkas along with metal crafts. Besides, we can see marvelous stone and wooden crafts on the durbar premises. One of a kind, the beautiful Krishna temple on the west of Patan Durbar Square, displays the ancient stonework.

Patan Durbar Square lies in the south of Kathmandu. Hence, we can reach the destination by a 40-minute bus ride from Tribhuvan International Airport. 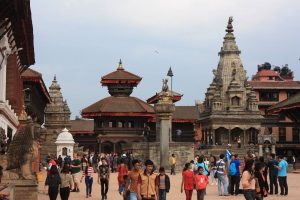 Bhaktapur, the ‘City of Devotees’, also has a museum of medieval art and architecture inside Durbar Square. The Malla palace shows the remnant of how an eastern culture used to be one time. Also, you will get every small utility that looks like a temple, dwelling sites, all gossip centers, traditional music, water sources with tremendous ancient enthusiasts.

Kathmandu, also known as the ‘’City of temples’’ offers many aesthetic masterpieces, the science of architecture, and spiritual energy. One outstanding example is the Changu Narayan, a sixteen hundred-year-old temple. It is a two-story pagoda-style temple enveloped by ancient carvings and statues that stand on a hilltop on the outskirts of the Bhaktapur District in Nepal. This is the temple of Lord Vishnu. And there’s an immense crowd of Hindu devotees to worship Lord Vishnu during Haribodhani Ekadashi.

The main temple has mythical creatures like elephants, winged lions, ram-horned giraffes, and lions designed beautifully. Most interestingly, it is the oldest surviving temple from an artistic, cultural, religious, and historical perspective. Further, the place UNESCO also listed the temple as a World Heritage Site in Nepal in 1979 AD.

We can reach the oldest shrine by a 30-minute bus ride from Tribhuvan International Airport in Kathmandu. Besides, Nagarkot Hiking Tour also takes you to the Changu Narayan Temple after a hike to Nagarkot hill to see the spectacular sunrise and sunset. 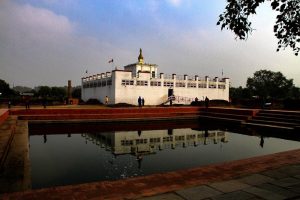 The spiritual heart of all Buddhists lies in the birthplace of Gautam Buddha, Lumbini. The marvelous structure is the World Heritage Site in Nepal. UNESCO enlisted it in the year 1997 AD. Besides, it is a Buddhist pilgrimage center, where the archeological remains are the essence of this tranquil place.

Soak into the beauty of spectacular monasteries being built up by Germany, China, India, France, Thailand, and many more. Along with the legacy it beholds, it has got meditation centers and landscaped parks for the public as well. There’s a grand celebration every year during Buddha Jayanti with an ardor to mark the Buddha’s birth date. The whole place looks charming, with colorful lights. They distribute clothes and food to needy ones. The Lumbini committee also held a prize distribution ceremony to award the heroes. If you visit Lumbini during Buddha Jayanti, you could see how grandly the Nepalese solemnize remembrance of the birth of Buddha.

After adopting Buddhism, Emperor Ashoka visited the Lumbini and constructed a stone pillar and four stupas back in 249 BC. Today, the Ashoka Pillar is firm evidence to prove Nepal as the birthplace of Gautam Buddha.

Further, the Lumbini lies in the Kapilvastu District in Nepal. We can reach the place by a 7 hours bus ride from the capital city. 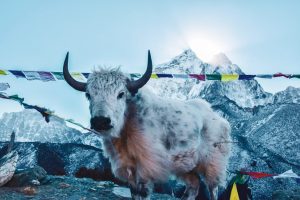 Yak in the Sagarmatha National Park

This park homes the proud roof of the world that connects the people of the earth, embracing natural beauty, the tallest mountains in the world, cultures, and adventures of Nepal to the world.

Sagarmatha National Park is a natural world heritage site in Nepal enlisted by UNESCO in the year 1979 AD. Today, you require a national park permit to enter the region. Besides, you can visit the area with any treks in the Everest region such as Everest Gokyo Lake Trek, Everest Base Camp Trek, and Everest Three Passes Trek. 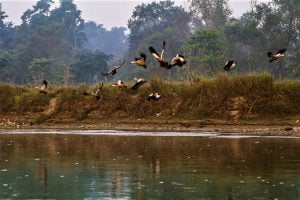 Chitwan National Park is a preserved rich biodiversity and ecosystems tucked between pushed chuckles of Terai. It conserves natural habitats for an enormous amount of flora and fauna. These grassy plains serve as a shelter for many endangered animals of the world like one-horned rhinos, many bird species, like the giant hornbill and Bengal tigers.

The national park is a World Heritage Site in Nepal enlisted by UNESCO in the year 1979 AD. Taking a tour to Royal Chitwan National Park can be a treat for your eyes and your soul, for the cinematic wildlife-viewing national parks of Asia.

Gorkha Durbar is an ancient palace in Gorkha District about 100 Km west of Kathmandu. The area has the main palace on a hilltop with attractions like Goraknath Cave and Kalika temple on the adjacent sides. Besides, King Prithvi Narayan Shah, who united Nepal, used the Durbar. Hence, the place also holds a long history of the unification of Nepal.

On hiking uphill for about 2 hours from the center of Gorkha city, you reach the Palace. From the top, you see amazing views of Ganesh Himal, green hills, and the entire Gorkha city. The terrace farm in the hills adds extra beauty to the place. Similarly, you can also visit an old museum at the bottom of the hill in the city. Overall, Gorkha Durbar is an amazing cultural heritage site to visit in Nepal.

So, these were the UNESCO World Heritage Site in Nepal. The country not only flaunts its unique triangular flag with sun and moon under the flagship of the world’s highest peak, Mt. Everest but also homes the world’s bravest soldier. As brightly as it gets named as “Land of the fighters”, these people are the kindest, ever-smiling, and most resilient ones. Take a cultural tour in Nepal to visit some of these amazing places. The unblemished topography is full of unique phenomenal energy suitable for episodes of high-level spiritual well-being. And it’s home to unique cultures, traditions, and celebrations.

What makes Nepal the most beautiful country? One of the many reasons probably can be the finest ornaments of the world, as UNESCO heritage sites.