Cost does not Include

Mustang Trek is all about exploring hidden civilization in the Upper Mustang Region of Nepal. Having a rich history and fascinating places like Lo Manthang, trekking is a favourite thing to do in the upper semi-deserted Himalayan region, Mustang. Likewise, it is an excellent way to know about the ancient Buddhist kingdom, Mustang that lies between Himalayas and Tibet.

Although modernization has influenced the area, it still surprises visitors with its unique culture and traditions. The people in the Upper Mustang are fighting back to hold ancient history and civilization. They have rebuilt the ancient monasteries, palace and refilled the area with ancient cultures and practices.

Trekking in Tibet and Trekking in Mustang is almost similar. The region is attached to Tibet in both cultural and geographical term. The walled city of Lo Manthang was a part of Tibetan plateau until the 1830s. Henceforth, Tibetan Culture and Traditions still prevails in the region.

Once the Forbidden Ancient Kingdom of Lo, now called the Upper Mustang, the region encompasses the northern half of Mustang district close to Tibetan Border. Upper Mustang is home to the people of Lobas from Tibetan descent.

Upper Mustang is a vast chunk of dry land, and yet full of life and immeasurable beauty. Since it receives the least rainfall, the region is one of the driest of all in Nepal. What the geography eludes, nature fulfils with the beautiful mountain rivers that quench the thirst of this massive land.

Because of its remoteness and inaccessibility; Mustang was a protected region in the Himalayas. The area used to be a separate kingdom inside the boundary of Nepal until 1950. The last official king of Mustang, Jigme Dorji Palbar Bista still has his palace in Lo Manthang. Later, because of its popularity, it was opened for outsiders to explore from the year 1992 AD. Still, foreigners require a special permit to enter the area.

Trekking in the Upper Mustang presents the rare opportunity to understand and live the life of the actual mountain people in their natural state. The geographical and political isolation from the mainstream has been vital to preserving its distinct culture, unexploited natural components, and ancient essences of the centuries-old monastery.

The medieval relics, colourful prayer flags, and people on horseback are very much different from today’s society. You will get to interact with some of the oldest mountain tribe families in Mustang. Similarly, you will share their myths and stories. Meanwhile, their never-ending bond between mountains and the individuals will amaze you. Then the royal palace, beautiful old monasteries, Amchi museum, and the School in the Upper Mustang tells an original story.

Upper Mustang has its beauty and glamour that no other trekking destination can provide. It is a rare gem to the people seeking for mystery and creating mythical narratives of the world of fantasy. Besides, it unfolds up-close views of magnificent mountains such as Mt. Annapurna, Mt. Dhaulagiri, and Nilgiri Himal. Further, the fabled villages will take your breath away along with the mysterious caves, carvings, and ancient Monasteries.

Best time to go on an Upper Mustang Trek

Although many trekkers prefer trekking in Nepal in spring and autumn, monsoon season, i.e. July to August is also the best time for trekking to upper Mustang.

Being in a rain shadow of Annapurna, the region receives less rain. Therefore, rainfall has a rare effect on your movement. The showers, in return, clear the skies and provide magnificent views of the actual gem of the area. On top of all, Upper Mustang Trek can be the best option for a trekking trip to Nepal during summer.

Besides, they hold a three-day traditional festival, Tiji in May. The festival takes place around the premises of the late king of Mustang in Lo Manthang and is celebrated with great joy and enthusiasm. People from other regions also travel to the area to take part in the festival. You can also be a part of the traditional festival and by adding a few numbers of extra days in your Mustang trekking.

On the off chance that your vacation time does not match any of the prime seasons, you can still trek in winter. But you must bring the right gears to make yourself warm and comfortable.

Like all high altitude treks in Nepal, the Mustang trek also needs a right level of fitness. The trip is moderate in scale, so any level of trekkers can go on a journey to Mustang. Still, there are a lot of difficulties to challenge you. You will cross the high passes accompanied by steep ascends and descend on the way. There will see stunning mountains with views to cheer you up. There will be the kingdom of Lo will compensate your tiredness. We also have an alternate way to visit Upper Mustang, i.e. in a luxurious Jeep Safari.

Before you come, we advise you to put some extra efforts on the gym or hiking. Work on your leg muscles and cardio. On top of all, do not forget to mention high altitude trek while buying travel insurance.

It requires all trekkers heading to Upper Mustang to get Restricted Area Permit. The government officials check the pass during your entry and exit at Kagbeni. Besides, it also requires purchasing the Annapurna Conservation Area Permit to enter the conservation area. You will need a government registered agency to get the permits to visit the upper Mustang. Needless to worry, Heaven Himalaya is there to get the license on your behalf. So, you can settle back and enjoy your vacation time.

So, aren’t you excited for a trip to the ancient valley of Mustang?

We will make sure that your mustang tour is a fantastic experience. Your trek begins with your arrival at Kathmandu. The following day you will reach Pokhara from where you will take a flight to Jomsom. Your trekking starts from Jomsom.

Welcome to the land of the Mountains. Our representative will greet and collect you at the airport and drive you to your respective hotels. As you check into the hotel, the representative will give you a short synopsis on our plans ahead. Tonight, spend your time at a hotel in Kathmandu

We will drive around wonderful sightseeing spots in Kathmandu. We will visit major tourist areas that are enlisted in UNESCO’s World Heritage sites such as Hanuman Dhoka Palace, Pashupatinath Temple, Boudhanath and Swayambhunath Stupa, etc. Afterward, we will visit the Thamel market place to purchase the necessary items and equipment for trekking.

Early morning tourist bus ride to Pokhara. After around seven hours of drive, we reach the beautiful touristic hub of Nepal – Pokhara. We check in the hotel, freshen up and get ready for a relaxing exploration around the lakeside Pokhara. The pristine air, serene lake water and mountains, lakeside Pokhara is a heavenly place to be at. In the evening, we return to our hotel. Spend your time at the hotel in Pokhara for the night.

Head to Pokhara Airport for the flight to Jomsom. Trek towards Kagbeni.

After special permit checking hike alongside Kaligandaki River and ascend the ridges towards Tangbe village and finally arrive Chele.

Start early to ascend the Taklam La pass along the steep, dry terrain. After some descents you will cross through a large gorge that opens up for Syanboche village.

Ascend a steep Yamada La towards the deserted areas than to Gailing with few settlements. A tough climb awaits in the Nyu La Pass which leads to Ghyami.

Descend to the colorful valley like the rainbow and cross Tangmarchu River. Again ascend ta plateau and pass Mani Wall and head to Charang village.

Descend to Tsarangchu and enter THolung village. And ascend to windy Lo pass towards Lo- Manthang

Hike to the flat land and descend from there to Dhe Khola and across the ridge downhill to reach Tange.

Early trekking for the long day. Cross the suspension bridge to reach the flat. Ascend further to Cacho La pass then descend to reach Tetang village.

Cross the Gyu La Pass and then descend to Chyangur village and then towards Muktinath.

Take a flight to Pokhara. Rest day, roaming around the city and souvenir shopping

Last day in the Capital city. You can take some rest and transfer photos or pay visits to local areas, shopping more souvenirs for your loved ones.

On this final day, you will be dropped at the International airport 3 hours before your flight time by our representative. Thank you and have a safe journey.

While going to the mountains, your Equipment’s acts as a best friend. Your Equipment determines the level of fun you will have in the trek. The weather can be extreme sometimes, so we advise you to carry enough items in your bag. Pack your bag with the things that keep you warm during morning and evening time and details that make you comfortable during day hiking.

For a total glance at what it requires trekking to this incredible area, see our recommended packing list.

Accommodation during the trek

In cities like Kathmandu and Pokhara, there is every hotel according to the budget. But, while you are in the Mustang trek, there will be tea houses. Tea houses are local hotels and lodges run by local communities. They provide basic meals in a communal dining hall. You will have clean bedrooms and toilets, usually with two single beds.

Myself and two companions did the Ghorepani Poonhill trek with this organization and I cannot prescribe it exceptionally enough.

From our first contact to our goodbye at the air terminal each progression was great. Nothing was too troublesome everything was so efficient. We had the best time ever and I credit it to the astonishing hierarchical abilities of Ramhari and his group of experts. Our guide, Ram, our porter Shiva and Niraj were simply fabulous. They took incredible consideration of us on the trek. I will be back, the spot is astonishing and I definitely will utilize Heaven Himalaya group and will seek after our equivalent guide and porters.

Heaven Himalaya Team offers a magnificently arranged trekking involvement in Nepal. Ramhari answered instantly to all my messages. They make a solid effort to make your vacation in Nepal an extraordinary one and genuinely went well beyond my desires.

I couldn't remember the name of the guide but my boy, you were more than amazing. I wish you good luck in the days to come.

Everything from pickup to trekking in the mountains was very professional with excellent service.

I strongly suggest everyone and will trek with Heaven Himalaya again in the future.

Trekking with Heaven Himalaya was an astounding encounter. My choice of outing and the organization were fantastic and of the correct choice. In every snapshot of my walk, I ran over experience and found something new. I can recollect memories of my initial step on the Everest Base Camp.

Trekking with Ram was an amazing experience. My selection of the trip and the company were excellent and of the right decision. In each moment of my walk, I came across adventure and discovered something new. I remember my first step on the Everest Base Camp. 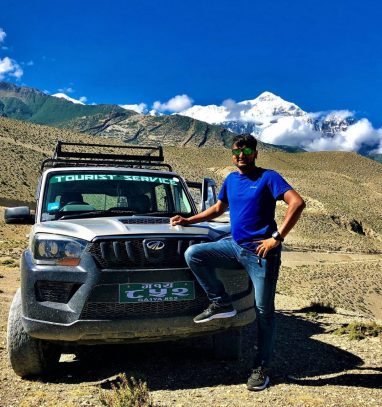 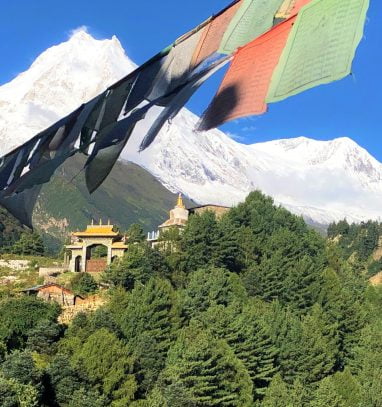 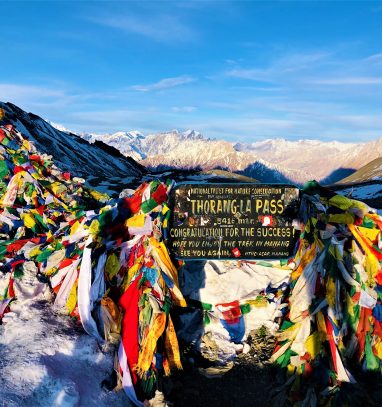