Why is Trekking in Nepal so Popular in the World?

Nepal is a country of contrasts. Trekking in Nepal is that one surreal experience encountering authentic Nepal on foot. Away from the crowd, skyscraping beauty, and the internet lies a connection of us humans with nature that never fails. Trekking is not just about the walks, it’s about the physical and mental presence, empathy, and appreciation. If you believe in the power of healing, trekking along the trails will make you believe in the power of wholeness.

Trekking in Nepal is a point of interest for people seeking adventure, mountaineers, canoeing, and rock climbers. Trekking has been on the bucket list of domestic and international adventure lovers for a long time now.

Colonel James Roberts showed tourists shall love trekking in glorious Himalayans for commercial trekking in the mid-60s. This is where trekking in Nepal started commercially and became famous all around the world within a few decades.

Nepal’s trekking trails such as Everest Base Camp Trek, Annapurna Circuit Trek, Annapurna Base Camp Trek, and many more are among the top 10 best trekking destinations in the world. Many popular travel websites like the lonely planet, TripAdvisor, Conde traveler, National Geographic Travel, etc also featured Nepal’s EBC trek as one of the best trekking destinations in the world.

Every year people visit Nepal for its mountains but is it just that? Or there is more to that with trekking in Nepal. If your friends ever ask for you to go trekking in Nepal, immediately pack a bag for a flight to Nepal, you will be clear to feel bigger than life.

Clouds after the sunset over the mountains

The geographers also refer to the Himalayan mountains as the “Third pole”. Being the source of major rivers and tributaries on the Asia continent, these mountains help regulate the planet’s climate. The melting of snow originates from the mountain rivers in the Himalayas. While you are on the trekking trails in Nepal, you get to see the most amazing fast-flowing rivers and streams.

Do you know? The mountains in the Himalayan range have names in the local language. For example, Nepalese refer to Mt. Everest as “Sagarmatha” in Nepali meaning ‘goddess of the sky and “Chomolungma” meaning goddess mother of the world. Since ages, the Himalayans are significant to the peoples of South Asia not just because it lies in five countries but because it reflects the history, mythologies, literature, culture, and religions.

According to Hindu mythology, Nepali people believe god Hanuman brought “Sanjivani Buti” which helped Laxman to revive narrow escape from death. There are many followers of Hinduism around the world who worship mountains. So, they come here every year to have a glimpse of these mighty mountains. Thus, the religious side of mountains attracts a lot of visitors for trekking in the Himalayas from around the world

Hindus also believe that Lord Shiva (scientifically considered the cosmic energy, with no beginning, form, and end) and the one with the ‘Third eye’ lives in this range. They even say that many sages meditate there for more than hundreds of years and some even have gained immortality as well. Himalayan mountains have speculated the gripping exchange of science, cultural, and art forms. While you are trekking in Nepal, you may also notice different monasteries, caves, and ancient buildings in the Himalayas.

Birthplace of trekking itself

Modern trekking began with the mountaineers going for expeditions in regal mountains. The successful attention-seeking came after Sir Edmund Hillary and Tenzing Norgay Sherpa conquered Mt. Everest. However, Nepalese have a long history of walking in this mountainous topography, as the country has rugged and difficult mountain terrain in the world. 75% of the total topography is mountainous in Nepal. Besides, the charm of the mountains, be it for gaining a state of consciousness or writing the oldest religious texts, or just for the odyssey, trekking in Nepal has existed since time immeasurable in humankind. Hence, the mention of success stories of the mountaineers in the International journal may have attracted voyagers throughout the world for trekking in Nepal.

Although spring is the ideal season to go trekking in Nepal. Because of varied diversity in blossoming flora and temperate days, Nepal has favorable weather for participating in trekking. Hiking is equally worth taking along with the trekking. The remote pristine lakes, the biodiversity, the religious places add beauty to the weather. The northern part of Nepal is popular for trekking, which includes cool summers and mild to severe winters. But the extreme weather is not as deadly as many other weather extremities of the world. Every season in Nepal is favorable to some treks in Nepal. However, Spring and Autumn season is still the best time for trekking in Nepal.

While you trek, every 1000 M gain in altitude decrease 6-degree Celcius temperature. However, Heaven Himalaya provides travelers with meteorological guidance. Also, they require a pass in areas where the situation can be harsh. 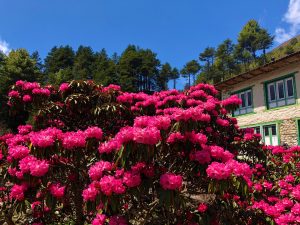 There are many national parks in the mountainous area such as Sagarmatha National Park, Manaslu National Park, Kanchenjunga Conservation Area. These national parks and conservation areas are home to different flora and fauna. Trekking through these national parks allows you to encounter many rare birds and animals. Some of the extremely rare animals you may encounter while trekking in Nepal is Red Panda, Snow leopard, Spiny Babbler, Himalayan Musk, etc. Likewise, the lush green hills, different varieties of Rhododendron, will surely leave you spellbound.

The Himalayas is home to medicinal herbs to cure many incurable diseases through allopathy as well. Every year a group of visitors comes here just to study herbs.

Trekking in Nepal brings the opportunity of bringing mountains to the world. I often take it as one of the best tourist destinations for trekking. Hence, the tourism industry has flourished beautifully in Nepal. That’s why the government and non-government agencies have set the utility for the convenience of trekkers.

The popular beaten path trekking routes are comparatively safe. If you want to go for an off-the-beaten-path, agencies cater you to an experienced trekking guide. The adventure tales can absolutely capture the beauty of the breathtaking sites along with the safety of their body. Some of the trekking routes are even possible to be conquered on their own. Thus, there are many solo trekkers in the world. Likewise, there is a wide range of trekking trails, from easy to very strenuous ones. So, an absolute beginner can also go on a trek like Mardi Himal Trek and Ghorepani Trekking. 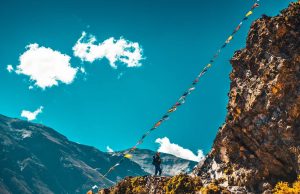 A trekker on the way to Annapurna

The flavor of Cultural Variety in the Trails

Trekking in Nepal is not limited to physical features, but it is also a cultural celebration. Undoubtedly, the cultural tribes, indigenous groups, religion following tribes are instances of unity in diversity. The socio-economic conditions, lifestyles, festivals, dresses, etc. invite many tourists to Nepal promoting cultural and religious tourism.

Sherpas, Tamangs, Tharus, Gurungs, etc. are some communities living in and around the trekking routes of Nepal. And, Tamang Heritage Trail trek that takes you to the Tamang Community to know about their lifestyle and culture.  Majorly, people following Buddhism are inhabiting near high mountains while travelers can also witness Hindu Culture on the way. The natural riches along with vibrant culture are a treat for the heart.

Travelers love interacting with locals on the way to know more mysterious things about the almighty mountains. These mountainous people have their unique lifestyles and traditions. They are far away from today’s world. And, It’s not wrong to say the lifestyles and culture of these mountainous people fascinate wanderers to visit Nepal again and again.

The hospitality of people in Nepal

Along with the comfortable accommodation, the wide smiling and welcoming people are the perks of traveling to see these trekking routes of Nepal. These simple people have been keepers of the mountains and beautiful culture inherited by the generations. Trekking in Nepal is also popular because of its friendliest people in the world.

Furthermore, Nepal trekking can get you an incredible opportunity to experience the isolated Tibetan Kingdom. The government of Nepal only opened Upper Mustang for outsiders in 1992, keeping the Tibetan atmosphere alive. You can now trek to Upper Mustang with a special permit from the Nepal government.

On top of all,  trekking in Nepal is so popular around the world because of the success stories of amazing travelers like you. Visit Nepal to create your own stories to tell the world.